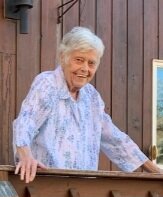 Mary Ruth grew up in Brooklyn and spent summers in Haines Falls at her family’s cottage. She graduated from Bishop O’Donnell High School and from the College of New Rochelle, and received her Master’s Degree from Hunter College. She spent most of her career as an Itinerant Teacher of the Blind with BOCES in Suffolk County, New York. After her retirement, she focused on her grandchildren, her volunteer work with St. Vincent DePaul food pantry at St. Joseph’s Parish in Kings Park, and more recently, with Mountaintop Historical Society in Haines Falls. She enjoyed spending time with her family, reading everything, decorating her lovely home, traveling, and the New York Times crossword puzzle. Over the years, she amassed a truly amazing collection of seashells from all over the world. Relaxing wasn’t Mary Ruth’s style - she was happiest when she was busy helping others.

Mary Ruth will be remembered with a Requiem Mass at 11:00am on January 28, 2023 at the Immaculate Conception Church in Haines Falls with a gathering for family and friends to follow.