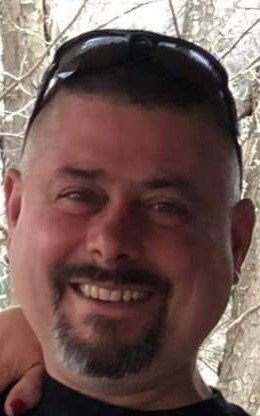 On Wednesday, January 6, 2021 John R Riggi, 48,  of Ashland NY; loving husband, father and faithful friend to many passed into the Heavens with his family by his side.

John was born on March 18, 1972 to Jack Riggi and Sue Pitetti.  John graduated from Roxbury Central School. John or “Riggi” as he was known by many, and a few as “Schmoopie” was an avid outdoors man, he often could be found outdoors tinkering on his “monster” pig roaster or fiddling with the lawnmower or 4 wheeler.  He had worked many jobs in his short stay here on earth from logging trees to construction but his heart was as a heavy equipment machine operator.  His last position at Hickory Hill Builders in Windham NY brought him much joy as he was able to work side by side every day with his close friend and brother Tod Aplin.

John was a direct man; he was a straight shooter and was honest.  You never had to guess what he was thinking or feeling.  His friendships were genuine, as was his love for his wife Celeste. They were married in July 2014 but had found each other years earlier only to make their love that much stronger, they were soul mates.  Together they built a steadfast home that was full of love, welcoming both for friends and family.

John always wanted to be surrounded by his family and friends, whether is was having one of his great “annual pig roasts”, camping with Celeste and his son John at Little Lake campground in Jefferson NY, or just hanging out and enjoying the company of good friends.  His greatest loves were his wife, his sons, his dogs, his family and his friends.

He was pre-deceased by his Step-mother Kim Riggi.

Calling hours for John will be Saturday, January 9th from 4-7 at Decker Funeral Home in Windham. Please remember masks are a MUST and to social distancing.